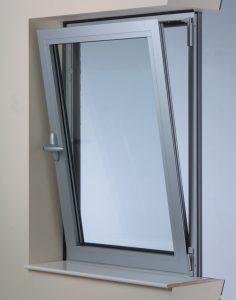 The Chrono rod system consists of 11 synthetic rods of various lengths, so that all window formats can be spanned.

Based upon the Chrono Safe Tilt-Turn system, the Sobinco Blast Mitigation system combines both the luxury of a tilt-turn window and the security of a fixed window. For applications where high levels of blast protection are mandatory, the Sobinco Bomb-Blast system adds the benefit of having a natural ventilation option.

For security reasons, the operation of the system can be controlled via a keyed handle. Systems can be fully locked-out to prevent unwanted operation or the handle can be limited to just a tilt feature. This lock-out feature allows the window to be fully closed or opened for ventilation without any need for keyed operation.

When the Blast Mitigation system is fully closed, the system has passed both large missile impact testing and live-fire bomb blast testing.

Each system is custom designed for your application. For more information, contact Bronze Craft Engineering.